Home » About the Program » Gary Wetzel 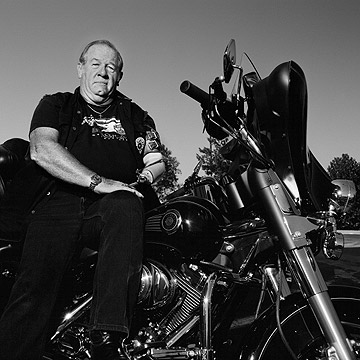 Gary Wetzel grew up as the second oldest of nine children and joined the Army at the age of eighteen. It was only one month after his nineteenth birthday when he landed in Saigon. With aspirations of being a pilot, he reenlisted to be guaranteed the duty station of his choice. Assigned to the 173rd Assault Helicopter Company, the Robin Hoods, Wetzel served as a door gunner. About ten days before he was scheduled to return home after serving two tours, he was shot down for the fifth time on January 8, 1968.

Wetzel’s helicopter, hit by a rocket-propelled grenade, had its left front blown apart and was trapped in the landing zone by intense, hostile enemy fire. Two of the crew were killed outright by enemy fire. While going to the aid of his aircraft commander, Wetzel was blown into a rice paddy by a homemade grenade that shredded his entire upper left arm and caused severe wounds to his right arm, chest, and left leg. Without hesitation, and despite profuse bleeding, he staggered back to his gun well, tucked his mangled arm into his waistband, and took the enemy under fire. Wetzel’s machine gun was the only weapon placing effective fire on the enemy, and although severely wounded, Wetzel remained at his position until he had taken out the automatic weapons emplacement that had been inflicting heavy casualties on the American troops and preventing them from moving against the enemy.

Passing in and out of consciousness, Wetzel sustained a stab wound to his right thigh from a bayonet. He disregarded his own wounds and returned to aid his crew chief who was attempting to drag the wounded aircraft commander to safety. He continued to grab other wounded and pull them across the rice paddy, all the while losing consciousness and blood.

After Wetzel and the other survivors were rescued the next morning, he spent a week on the critical list. His arm was amputated in a field hospital, but he had to undergo another surgery in a Tokyo hospital because of infection. After about five months in hospitals, Wetzel began to learn how to live a productive civilian life with a prosthetic arm.

While working as an expediter in Wisconsin, Wetzel was approached by a colonel, a major, and a first sergeant who told him that he was going to Washington to receive the Medal of Honor. It took the officers two weeks to convince him that they were sincere. Wetzel received the Medal of Honor from President Lyndon Johnson on November 19, 1968, in a ceremony at the White House.

When asked what the medal means to him, Wetzel replied, “When I was in the Tokyo hospital, where the doctors took out more than four hundred stitches, some of the guys I pulled out who were recovering from their wounds found out I was there. They would walk up to my bed and ask, ‘Are you Gary Wetzel?’ And I’d say, ‘Yeah,’ and they would pull out pictures of their wives, kids, or girlfriends and say, ‘Hey, man, because of you, this is what I’ve got to go back to.” And then Wetzel would reply, “I’m not Superman. I was just a guy doing his job.”