Home » About the Program » Jay Vargas 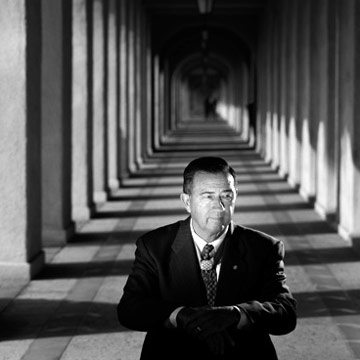 The son of immigrants—an Italian mother and Hispanic father—Jay Vargas had two older brothers who fought at Iwo Jima and Okinawa in World War II, and a third who fought in Korea. Vargas himself got as far as the Class A Portland team in the Los Angeles Dodgers farm system in the early 1960s before he realized he probably wouldn’t make it as a big-league baseball player. He decided to play for the Marines instead.

By 1968, Captain Vargas was in command of Company G of the Fourth Marines in Vietnam. On April 29, his unit, positioned along the demilitarized zone separating North and South Vietnam, was the last American element in the area. It was supposed to be lifted out, but when the helicopters came under heavy fire, Vargas’s men had to march to base camp during the night. Along the way, hundreds of enemy artillery rounds burst around them, but the impact of the shells and the spray of shrapnel were partially absorbed by the soft muddy soil of the rice paddies, and everyone made it back to base without serious injury.

The next day, although they hadn’t slept for thirty-six hours, Vargas and his men were loaded onto landing craft and taken down the Bo Dieu River to an area around the village of Dai Do where two other Marine companies were in a battle with a North Vietnamese Army regiment. Company G went ashore at about one in the afternoon. Vargas had been ordered to attack across seven hundred yards of open ground; the company made it about one third of the way before the NVA opened fire. When one of Vargas’s platoons was pinned down at a hedgerow by machine guns and mortar and artillery rounds, he hurried toward it with a reserve platoon. Although wounded by a grenade, he took out three machine-gun positions by himself. Company G finally entered the village in the afternoon and engaged in hand-to-hand fighting with enemy soldiers popping up from spider holes and out of abandoned huts.

Vargas thought he had secured Dai Do when suddenly the NVA launched a massive counterattack. Taking cover in the village cemetery, Company G dug up fresh graves, tossed out the bodies, and used the holes for cover. The fight raged through the night.

The next morning, the bodies of more than three hundred enemy soldiers lay near their position. Vargas’s battalion commander arrived on the scene and ordered a renewed assault on the village. Low on ammunition, Company G pistol-whipped, stabbed, and beat the enemy with rifle butts. Vargas killed a North Vietnamese soldier with his knife. He carried to safety a Marine whose arm had been severed, and when the soldier pleaded for his arm, Vargas went back and found it. When the battalion commander, fighting like any other rifleman, was shot in the back three times, Vargas dragged him a hundred yards to an evacuation point, firing at the enemy as he went with an AK-47 he had picked up on the battlefield. By the end of the third day of battle, the North Vietnamese melted away and Vargas finally allowed himself to be treated for a bullet wound in his side and shrapnel from mortar blasts.

Jay Vargas received the Medal of Honor from President Richard Nixon on May 14, 1970. After the ceremony, his father struck up a conversation with the president. The next day, the senior Vargas disappeared for several hours. When he returned and his son asked him where he’d been, he replied nonchalantly that the president had asked him to come to the White House and have a sandwich with him.