Home » About the Program » James Taylor 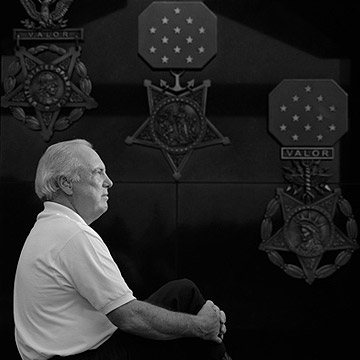 James Taylor served in the Army as an enlisted man for ten years before being selected for Officer Candidate School and becoming an officer. After graduating as a lieutenant, he was assigned to the 1st Squadron, 1st Cavalry. In 1967 he was the executive officer of B Troop in Vietnam.

On November 8, 1967, Taylor was at his base camp when he was notified that his commander had been wounded in action and was being evacuated from the battle area. Taylor was ordered to fly out to the combat zone by helicopter to assume command of B Troop. At that time, B Troop was under the operational control of the 3rd Brigade of the 1st Cavalry Division. After arriving in the combat area, a decision was made to consolidate the troop, evaluate the situation, and attack the enemy at first light the next day.

Prior to launching the attack, Taylor was replaced as troop commander and resumed his duties as executive officer. As the battle began the next morning, Taylor’s priorities were to coordinate the evacuation of the wounded, to call in air and ground support, and to arrange for additional supplies, including ammunition and fuel.

On the morning of November 9, the troop’s armored personnel carriers were pushing through an overgrown area near Que Son on a search-and-destroy mission. Early in the day, they approached a hillside, which suddenly erupted with enemy machine-gun, recoilless rifle, and mortar fire. Taylor and the other officers realized they had stumbled onto a regimental-size North Vietnamese force.

One of the armored cavalry assault vehicles was hit immediately by recoilless rifle fire, wounding all but five crew members. Lieutenant Taylor rushed through heavy enemy fire and the detonating ammunition that was stored in the burning vehicle to pull each of the wounded men to safety. Moments later, the vehicle exploded.

Within minutes, a second armored vehicle was hit and caught fire. Once again, Taylor moved forward on foot to pull the wounded to the safety of a nearby dike just before the vehicle exploded. This time he was knocked down and injured by a mortar round, but he managed to get to his command vehicle and began to establish a medical evacuation site for his men.

Suddenly, his vehicle was raked by machine-gun fire. He began firing his own machine gun and killed the three-man North Vietnamese crew. As he was approaching the evacuation site, yet another U.S. assault vehicle was hit. Again he dismounted and ran forward to pull out the wounded. After loading them into his vehicle, he drove them to the evacuation site, to get them aboard the medevac helicopters.

Taylor reorganized his unit and briefed the new commander when he arrived. Then he participated in another attack that eventually overran the North Vietnamese position.

Early in 1968, he received a letter from his wife in which she said that members of her family had heard he was being recommended for the Medal of Honor. He assumed it was merely a rumor until he was pulled back from the front lines—despite his protests—and made company commander of Headquarters Company, 123rd Aviation Battalion at Chu Lai, South Vietnam.

At the White House on November 19, 1968, Taylor was nervous and worried about embarrassing his family. But it was President Lyndon Johnson who became emotional. He had tears in his eyes as he shook Taylor’s hands, and embraced him after awarding him the medal.