Home » About the Program » Alfred Rascon 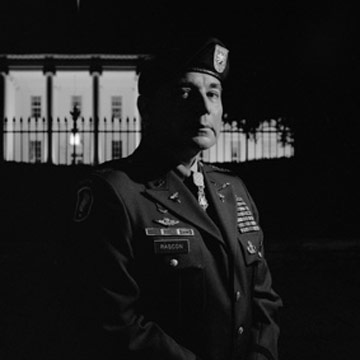 At the age of four, Alfred Rascon came to the United States from Chihuahua, Mexico with his parents. He became a legal resident a few years later and would always think of himself as “an immigrant by birth, an American by choice.” Growing up near California’s Port Hueneme Naval Station during the Korean War, he was fascinated by the military; he made parachutes out of old sheets and staged imaginary combat jumps off the roof of his house. At seventeen he enlisted in the army and became a medic in the 173rd Airborne Brigade.

In the spring of 1966, Specialist Fourth Class Rascon’s reconnaissance platoon was part of a major operation in the jungles of Long Khanh Province. His battalion had been running into resistance from small units of North Vietnamese troops for a few days and, more ominously, finding large caches of weapons and supplies, which suggested that an offensive was being planned.

Early in the morning of March 16, the 1st Battalion’s sister battalion a mile away came under a severe North Vietnamese attack. Shortly after Rascon’s unit moved to reinforce it, its point men came under came upon the enemy setting up an ambush. A firefight broke out, beginning what Rascon would later recall as “ten minutes of hell."

Ignoring orders to stay sheltered, “Doc” Rascon ran forward to tend to the wounded, who were lying along a narrow trail that was exposed to devastating fire from in front. He made his way through the intense fire to a badly hurt machine gunner; as he crouched over him, Rascon was hit by shrapnel from grenades and a bullet that entered his hip and exited at his shoulder blade. He dragged the man back, but by the time they reached cover, the gunner was dead.

When a second wounded machine gunner yelled, “Need ammo!” Rascon crawled through heavy fire to bring him bandoliers of ammunition. Then fearing that an abandoned machine gun could fall into enemy hands, he crawled back to retrieve it, but a grenade exploded, spraying shrapnel in his face. Later he used his body to shield another downed GI from fire as he administered treatment to him, saving his life.

Out of the corner of his eye, he saw a grenade land near a sergeant who had already been hit; he jumped up and threw his body over the man. The explosion blew the helmet off Rascon’s head and the rucksack off his body. He lay there for a moment in the midst of all the fighting bleeding from his ears, mouth, and nose. He refused morphine because he didn’t want to be incapable of treating his wounded comrades. When he began drifting in and out of consciousness, he was taken to a field hospital. When he came to, the clean sheets made him think he was back home – until he saw that the patient in the next bed was a North Vietnamese soldier.

Rascon heard that he had been recommended for the Medal of Honor but didn’t pay any attention to the rumor. He spent three months in a hospital in Japan, and then was sent home. Upon his discharge from the Army in 1966, he joined the reserves, went to college, and finally became a naturalized citizen. In 1969, he returned to active duty and was commissioned a second lieutenant. He then returned to Vietnam in 1972 for another tour.

In 1993, some of the men whose lives Rascon had saved in 1966 heard that the recommendation for his medal had gotten lost in red tape. Without Rascon’s knowledge, they asked the Army to reopen the files. They took the case to Illinois Representative Lane Evans of the House Veterans Affairs Committee, who passed the information on to the White House. On February 8, 2000, with the men he had saved looking on, Alfred Rascon received the Medal of Honor from President Bill Clinton.