Home » About the Program » Thomas Norris 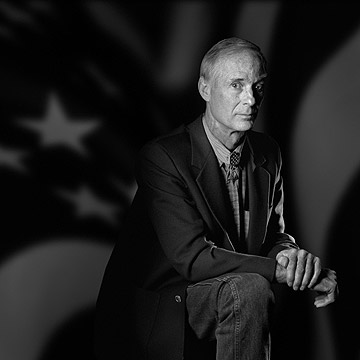 Thomas Norris graduated from the University of Maryland in 1967. He had studied criminology with the hope of joining the FBI, but knowing that he had to satisfy his military obligation, he enlisted in the Navy, eventually joining the SEALs.

On April 2, 1972, a U.S. electronic surveillance aircraft was downed by an enemy surface-to-air missile. Lieutenant Colonel Iceal Hambleton was the sole crew member to eject safely—but he parachuted into the middle of some thirty thousand North Vietnamese troops. Over the next several days, during an extensive rescue effort, four aircraft were downed, ten Americans were killed, two were captured, and another two were trapped behind enemy lines.

Lieutenant Norris volunteered to go after the survivors. On April 10, his five-man team was inserted into a forward operating base (FOB). That evening, Norris led his team through enemy positions to a predetermined interception point deep in enemy territory. One of the downed airmen, Lieutenant Mark Clark, had been informed over his survival radio to work his way to the river and to float downstream. Hiding on a riverbank, Norris heard Clark approaching, but he had to let the American pilot float by because of a nearby North Vietnamese patrol. Once the enemy had passed, Norris slipped into the river and swam after Clark, locating him and returning him to the FOB.

Then the FOB came under heavy attack, resulting in the loss of half of the personnel there. During this attack, Norris saved numerous South Vietnamese soldiers, directed counter-fire, and treated the wounded at the base.

On April 13, a forward air controller pinpointed Lieutenant Colonel Hambleton’s whereabouts, and Norris and one of his South Vietnamese commandos made a third attempt to rescue him. At nightfall, the two men, dressed like the enemy, got into a sampan and began paddling upriver through enemy positions. They managed to locate Hambleton, but fearing that he was too badly injured to wait for the cover of darkness to bring him out, they put the airman in the bottom of the sampan, covered him with vegetation, and started back downriver. Nearing the FOB, the boat came under heavy machine-gun fire. Norris called in an air strike and, as American planes dropped bombs and smoke, they brought Hambleton to safety.

Several months later, Norris was leading a SEAL patrol on a reconnaissance mission when his team was ambushed by a large enemy unit. At the end of a long firefight, Norris ordered his men to head for the water and the boat waiting to pick them up, while he provided cover. When he was shot in the head, another SEAL, Michael Thornton, charged back to save him, killing two North Vietnamese about to dispatch Norris. For his action, Thornton would be awarded the Medal of Honor in October 1973. Norris, who was hospitalized for three years, defied doctors’ orders and attended the White House ceremony.

Norris heard that he too might be recommended for the medal, but he didn’t feel worthy of it. However, in 1975, when the rescue of Clark and Hambleton was finally declassified, Navy investigators talked with those involved and submitted the action for review. On March 6, 1976, with Michael Thornton in the audience, Thomas Norris was awarded the Medal of Honor by President Gerald Ford. In 1979, after leaving the military, Norris picked up his dream of joining the FBI. He retired in 1999.