Home » About the Program » Walter Marm 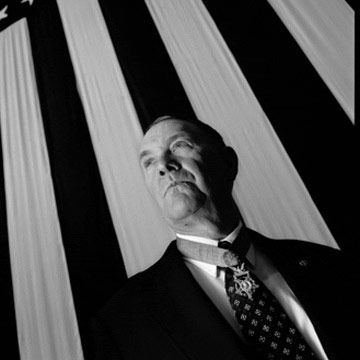 When Walter Marm graduated from college with a business degree in 1964, Vietnam was a distant place that didn’t figure in his personal geography. He enlisted in the Army, graduated from Officer Candidate School a second lieutenant, and attended Ranger School. But the Army needed junior officers for a new unit being formed, the 1st Cavalry Division, and he was reassigned. This airmobile division was to test the theory that helicopters could function as the modern equivalent of the horse, carrying men quickly into the heart of a battle. Marm was assigned to the division’s 7th Cavalry—George Armstrong Custer’s old unit. By September 1965 he was in Vietnam.

At noon on November 14, the 7th Cavalry’s 1st Battalion was on a sweep through the Ia Drang Valley when Company B suddenly came under heavy fire. It was the beginning of the first large-scale pitched battle between American and North Vietnamese troops, and would later be dramatized in the film We Were Soldiers.

Company A was ordered to relieve the isolated troops and moved out quickly through the thick underbrush. Lieutenant Marm’s platoon assumed the lead but was forced to take cover as it came under intense fire from the well-disciplined enemy. When Marm saw four North Vietnamese soldiers trying to outflank his unit, he moved toward them through a hail of bullets and killed all four. And when he saw his men under siege from a well-concealed machine gun, he stood up to draw its fire so he could determine its location. The gun was behind a large, anthill-shaped berm; Marm aimed a bazooka at it and shot. The explosion, though dislodging some of the North Vietnamese soldiers hiding behind the berm, failed to destroy the machine gun. Marm charged over the open ground toward the mound and threw a grenade behind it, killing eight of the enemy. Marm went around to the left side of the berm, killing the remaining enemy with his M-16 rifle. Turning to motion his men forward to relieve the trapped platoon, he was shot by an enemy soldier in the left jaw; the bullet exited on the right side of his neck. Two of his soldiers rushed to treat him, then escorted him to the battalion command post. He was medevaced out of the battle zone by nightfall.

The Medal of Honor was presented to Marm by Secretary of the Army Stanley Resor at the Pentagon on December 19, 1966. In 1969, Marm asked to go back to Vietnam for a second tour; he was allowed to return only after signing a waiver stipulating that going back into harm’s way was his own choice.

Marm retired from military service as a colonel with thirty years of service. He now raises pigs in North Carolina.