Home » About the Program » Thomas Kelley 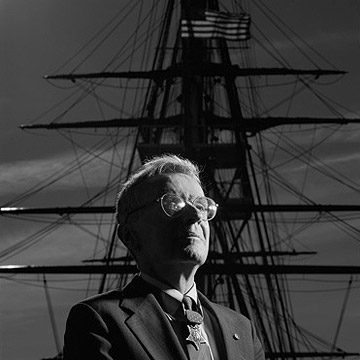 Thomas Kelley was about to graduate from Holy Cross College in Massachusetts in 1960 when his roommates announced that they’d enlisted in the Navy and urged him to do the same. Kelley couldn’t think of any reasons not to, so he joined, too. His first assignment after Officer Candidate School was aboard an old World War II landing ship in the Caribbean during the Cuban missile crisis; he liked the duty so much that he decided to make the Navy a career.

He served in the fleet off the coast of Vietnam in 1966, but he wanted to get closer to the action and in 1968 volunteered for the Navy’s River Assault Division, part of the Mobile Riverine Force operating on the mazelike riverways of the Mekong Delta. It was a new kind of naval warfare. The boats used were modified World War II troop carriers refitted with guns and armor. The lighter ones were called tangos, and the more heavily armed ones were known as monitors because they resembled Civil War ironclads. Their job was to insert Army troops at freshwater beachheads throughout the delta, provide fire support during their operations, and extract them after their mission was completed. Because of their size and slowness, the boats were particularly vulnerable to enemy guns concealed in the jungle along the water’s edge.

On June 15, 1969, Lieutenant Kelley was in charge of a group of eight boats in Kien Hoa Province that had been moving Army forces around for several hours. Late in the day, after taking the soldiers back on board, one of the boats experienced a mechanical failure when it tried to retract its loading ramp. Unable to move, it was immediately targeted by rocket-propelled grenades, machine guns, and mortars from the Vietcong on the opposite side of the river. Kelley maneuvered his monitor between the disabled boat and the enemy and opened fire. When a Vietcong rocket hit a few feet away from him, penetrating the armor of the command area and spraying shrapnel in all directions, Kelley was thrown to the deck below, suffering serious head wounds. Another boat came up, and its corpsman courageously jumped onto the deck of the monitor to begin the first aid treatment that saved Kelley’s life. Unable to stand and struggling to remain conscious, Kelley continued to command the battle until the damaged troop carrier was repaired and the squadron was able to get out of harm’s way.

He was helicoptered to a field hospital, where he lay in a coma for several days. Having lost an eye and portions of his skull, he underwent reconstructive surgery for his head wounds and was fitted with a prosthetic eye. The Navy declared him unfit for duty and was about to release him when he appealed directly to Admiral Elmo Zumwalt to stay on active duty. His request was accepted.

President Richard Nixon awarded Thomas Kelley the Medal of Honor on May 14, 1970. During some small talk after the ceremony, the president, noting that Kelley was from Boston, asked if this meant he ate baked beans every night. Kelley was momentarily taken aback by the question. “No, sir,” he finally replied, “only on Saturdays.” Kelley retired as a captain in 1990.