Home » About the Program » Robert Ingram 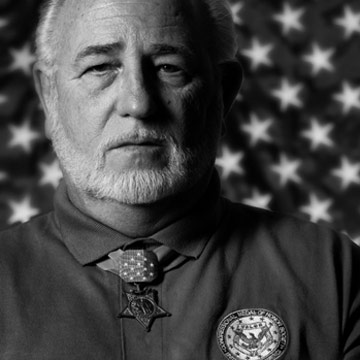 In 1963, Robert Ingram enlisted in the Navy to learn aviation electronics. But after he came down with pneumonia and was sent to the dispensary, he witnessed a meningitis outbreak and was touched by the selfless dedication of the corpsmen. He decided to attend Hospital Corps school. Upon graduating, he was assigned to the 7th Marines. He volunteered for C Company, known as “Suicide Charley,” because it was always in the middle of things. His unit was ordered to Vietnam in the summer of 1965.

A fully staffed company when it landed, “Suicide Charley” had 112 men left on March 28, 1966, when Ingram and another Marine followed two North Vietnamese soldiers down a slope toward a rice paddy. They shot and killed the men, only to be fired upon by more than one hundred automatic weapons. They had run into a large force of the enemy readying an ambush.

The other Marine charged the enemy and was hit immediately. By the time Ingram reached him, he was dead. While kneeling over him, Ingram himself was shot through the palm of his hand. Yet, using the fallen Marine’s weapon and ammunition, Ingram tried to suppress a North Vietnamese machine gun causing casualties among his company. Then, he saw that his platoon leader was down. While trying to reach him, Ingram took a bullet in the left knee. When he reached the officer, he was dead. Ingram grabbed the man’s weapon and ammunition and limped toward another fallen Marine. As he sheltered the Marine with his body and tried to treat him, Ingram sensed a motion on his right. As Ingram turned, a North Vietnamese soldier fired at close range. The bullet hit Ingram’s right cheek below the eye and passed out through the left jaw. Deaf and partly blinded, Ingram killed the enemy.

Ingram was sure that he, too, would die, but he decided that he would die fighting. Seeing one Marine who was alive, he pulled the man back into the protection of a hedgerow and stuck his rifle into the ground to mark his place. Then he moved to the edge of the rice paddy, and picked off North Vietnamese soldiers one by one until he became too disoriented from blood loss. He dragged himself back to the command post, but he would remember little of what happened until he was back in the United States weeks later.

Ingram left the service in 1968, and became a registered nurse in a family practice in Jacksonville, Florida. He had no contact with the men of Charley Company until 1995, when his former platoon leader called him one night. The memories poured out as they talked for hours. Several days later, they met, and the officer asked, “What medals did you receive for 28 March?” “The Purple Heart,” Ingram replied. Shocked, his former commander blurted out, “You were put in for the Medal of Honor!”

As a result of this conversation, the men of Charley Company reunited and committed themselves to do whatever it took to make sure Robert Ingram got the recognition he deserved. They gathered the witnesses to Ingram’s actions that day in the rice paddy and worked through political channels to revive the Medal recommendation. In so doing, bonds between the men were reestablished and deepened, and some of the wounds of Vietnam that had separated them were healed. When Robert Ingram received the Medal of Honor from President Bill Clinton on July 10, 1998, twenty-four of the men he served with were with him at the White House.