Home » About the Program » Thomas Hudner 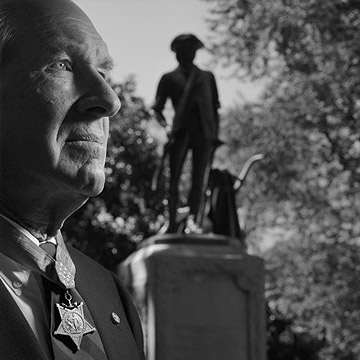 Thomas Hudner had no particular interest in airplanes when he graduated from the Naval Academy in 1946. He wanted only to serve aboard a ship. But in 1948, after he had been at sea for several months and had worked as a communications officer at Pearl Harbor for a year, he was ready for a new challenge and volunteered for flight training. He was briefly stationed in Lebanon before being assigned to the carrier USS Leyte as an F4U Corsair pilot.

By the fall of 1950, Lieutenant Hudner was flying combat missions in Korea. On December 4, he was one of a flight of six fighters sent out on an armed reconnaissance mission over North Korea. Hudner was wingman for a Navy flier named Jesse Brown, the son of a Mississippi sharecropper who had attracted a good deal of attention—and some discrimination—as the Navy’s first black pilot.

While strafing enemy positions at a low altitude, Brown’s plane was hit by antiaircraft fire. Smoking badly and without power, the aircraft was too low for Brown to bail out or clear the snow-covered mountains. Hudner followed Brown down, calling off a checklist to help prepare him for the crash landing.

Brown put his plane down in a wheels-up landing in a clearing below. The impact buckled the fuselage at the cockpit, and Hudner was certain that Brown was dead. To his amazement, Brown opened the canopy and waved weakly, but he appeared to be unable to free himself. Knowing that rescue helicopters had a long distance to travel, Hudner decided to help Brown get out of the plane himself. He didn’t ask permission from the flight leader because he knew it would be denied.

Hudner radioed, “I’m going in,” then dumped his ordnance, dropped his flaps, and landed wheels up, hitting the hilly area hard. He got out and struggled through the snow to get to the downed plane. Hudner saw that Brown’s right leg was crushed by the damaged instrument panel, and he was unable to pull him out of the wreckage.

Hudner kept packing snow into the smoking engine and talking to Brown as he drifted in and out of consciousness. When a U.S. helicopter arrived, the pilot worked with Hudner for forty-five minutes trying to get Brown out. They hacked at the plane with an ax, and even considered amputating Brown’s trapped leg with a knife. The snow packed on the bottom of their boots prevented them from getting any firm footing on the plane’s wing. As nightfall approached, bringing temperatures as low as thirty degrees below zero, it was clear that Brown was dead. Hudner hated to leave the body behind, but the helicopter pilot couldn’t fly in the mountainous terrain after dark. Reluctantly, the two men returned to base camp.

The next morning, reconnaissance showed that Brown’s body, still in the cockpit, had been stripped of clothing during the night by enemy soldiers. Because of the hostile forces in the area, it was impossible to retrieve it. The following day, the commander of the Leyte ordered four Corsairs to napalm the downed plane so that Brown could have a warrior’s funeral.

By February 1951, the Leyte was back in port in the United States. In mid-March, Hudner found out that he was to be the first American serviceman in the Korean War to receive the Medal of Honor. Daisy Brown, the widow of Jesse Brown (who had been posthumously awarded the Distinguished Flying Cross), was present when President Harry Truman put the medal around Thomas Hudner’s neck on April 13, 1951.