Home » About the Program » Harold Fritz 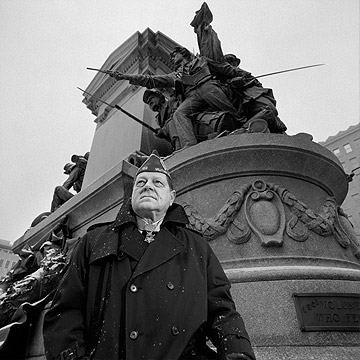 On January 11, 1969, Fritz was leading a column of seven heavily armored vehicles on a dirt highway near Quan Loi. The mission, billed as a “gravy run,” was supposed to have been one of his last before leaving Vietnam. However, it turned out to be anything but routine. At around 10:30 in the morning, while escorting a U.S. truck convoy resupplying American forces with fuel, ammunition, and other supplies, Fritz was suddenly blown out of his armored vehicle by a huge explosion. Climbing back onto his burning vehicle, he saw that the column had been ambushed by a large force of North Vietnamese soldiers with positions on both sides of the road. Fritz’s force was caught in a crossfire of automatic weapons, rocket-propelled grenades, and recoilless rifles. The two machine-gunners in his vehicle were killed; many others in the twenty-eight-man platoon were wounded. Ultimately, only five men in the unit were still able to fight.

When about twenty North Vietnamese from one side of the road assaulted his force, Fritz jumped into an armored vehicle and took a heavy toll on the attackers with its M-60 machine gun. When a similar enemy force attacked from the other side, Fritz, fighting with a pistol and a bayonet, led his tiny force in a point-blank charge that temporarily drove the enemy back. He was hit several times by shrapnel and small-arms rounds; one particularly heavy blow on the left side of his chest knocked him down.

During the initial ambush, Fritz had tried to call headquarters for assistance, but his radio was damaged and he didn’t know if the transmission had been received. As he readied his men for a last stand to protect their wounded, he saw the aerial of a U.S. tank coming down the road. It was part of a tank platoon that had overheard Fritz’s call for help.

With the fresh armor force in the battle, the tide began to turn. Eventually, Fritz and his wounded troopers were evacuated by helicopter. Later that day, when he returned to the battlefield, he found a battered cigarette lighter that had been given to him as a going-away present by his wife. It had been in his left breast pocket and had stopped an enemy bullet that would otherwise have killed him.

Harold Fritz returned to the United States in the spring of 1969. He was serving with the 3rd Armored Cavalry Regiment at Fort Lewis, Washington, early in 1971 when a call came from the Department of the Army informing him that he was to receive the Medal of Honor. The White House ceremony was conducted by President Richard Nixon on March 2, 1971. Leaving his infant son at home, Fritz was accompanied by his father and mother, brother, wife, and elder son and daughter. Before placing the medal around Fritz’s neck, president Nixon gave the men, including Fritz’s son, commemorative tie clasps. The boy looked up at the President and said, “My little brother who’s not here didn’t get one.” The President removed his own tie clasp and handed it to the boy, saying, “Well, then, give him this.”