Home » About the Program » Robert Foley 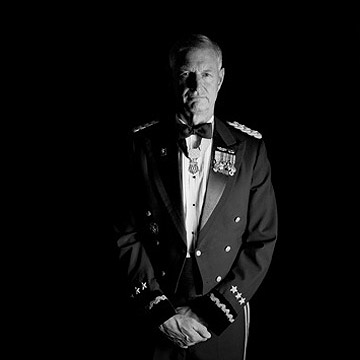 Robert Foley was a basketball star in high school. At six foot seven, he had received fifteen college scholarship offers by the end of his senior year. He was still considering his options when the hockey coach from West Point happened to pass through Massachusetts on a weekend Foley scored forty-four points in a game. He told the West Point basketball coach about Foley. The coach invited him for a visit and asked him to play Army basketball. Foley knew that going to West Point would eliminate the possibility of his playing professional basketball, but he was impressed with the history and sense of purpose he saw at the academy and decided to enroll.

He graduated in 1963 (having been captain of the 1962–1963 basketball team and a member of the East All-Stars), then joined the infantry and went through Airborne and Ranger schools. By 1966, he was a twenty-five-year-old captain and company commander in the 27th Infantry in Vietnam.

On November 3, his company returned to base from a ten-day search-and-destroy mission, hoping for some rest. The next morning, however, Foley received new orders. Another company in his brigade had come upon a North Vietnamese regimental base, and in the fight that had followed, the enemy, determined to protect its force and supplies, had surrounded the American unit and killed or wounded much of its leadership. Foley’s mission was to get the surrounded GIs out.

As Foley’s company began its advance early on the morning of November 5, it immediately came under heavy fire from a well-concealed force and suffered several casualties. Because of the location of the besieged unit, as well as the triple-canopy jungle cover and dense vegetation, Foley couldn’t call in artillery or air support, so he led two of the platoons in a direct attack. When two radio operators were wounded in the heavy fire, he helped them to cover where they could get medical aid, then moved back into the center of the action. He was worried that his company would lose momentum and angry that his soldiers were getting hit.

When he saw one of his machine gunners go down, he ran to the gun, picked it up, and draped the ammunition belt over his shoulders. His instinct as an athlete taking over, he charged forward, firing the heavy weapon from the waist. Over the next few minutes, he assaulted the enemy gun emplacements, single-handedly destroying three of them.

Penetrating the last bunker complex, he found himself alone for a moment, with perhaps only ten rounds of ammunition left. Then his men caught up with him, and he continued to push them forward for the next several hours. After the encircled American company was finally extracted, Foley was ordered to withdraw.

As a result of recommendations his soldiers had written after this action, Robert Foley was awarded the Medal of Honor on May 1, 1968, by President Lyndon Johnson, who also presented one to Sergeant John Baker, one of Foley’s men who had distinguished himself in that engagement.

Foley remained in the Army until 2000, attaining the rank of lieutenant general. He ended his thirty-seven-year military career as the commander of the Fifth Army, then became president of Marion Military Institute in Alabama, the nation’s oldest military preparatory school and junior college. Today, he continues to serve U.S. Army soldiers and their families as director of Army Emergency Relief, a private nonprofit organization with headquarters in Washington, D.C.