Home » About the Program » James Fleming 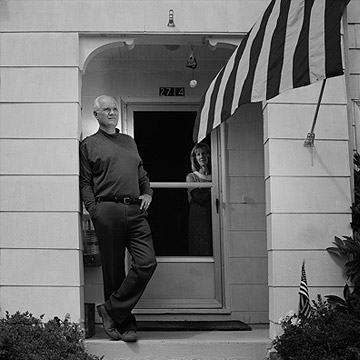 James Fleming never had any doubt that he would follow in the footsteps of his father, a career Air Force pilot. After graduating from Washington State University, he was commissioned as a lieutenant in the Air Force. Following flight school, he became a UH-1F (Huey) helicopter pilot with the Air Force 20th Special Operations Squadron. In 1968, he was living in the jungle of Vietnam and flying Special Forces teams on long-range reconnaissance patrols deep into enemy territory. On November 26, his five-ship Green Hornet flight—two Huey gunships and three lightly armed Huey slicks—heard over the radio that one of the Special Forces patrols it had inserted earlier was being overrun by a large group of North Vietnamese. The Green Hornets went to get them.

They found the patrol in a clearing, surrounded by the enemy on three sides and being forced to retreat to a river. The gunships immediately took out two enemy machine guns. Then one of them was hit and went down. One of the slicks rescued the crew and returned to base, accompanied by a second slick that was running short on fuel. This left one Huey gunship and Fleming’s lone slick to rescue the encircled American patrol.

Fleming descended into the clearing, facing the jungle area where the enemy was concentrated; he positioned the tail of his chopper over the riverbank, so low that his blades cut the foliage of the trees. The North Vietnamese gunners in the bushes below immediately zeroed in and began to rake Fleming’s ship with heavy machine-gun fire. The trapped patrol couldn’t make it to the helicopter. It was forced to return to the river.

Though he was running low on fuel, Fleming knew he was the only hope the patrol had. He rose above the battleground to take stock of the situation, then descended again. He turned the chopper so his side gunners could lay down suppressing fire, then positioned it again over the riverbank so the U.S. soldiers could board it. The patrol set off a series of claymore mines, allowing six of the men to board as enemy shells smashed into Fleming’s windscreen. The last, the team leader of the patrol who had been separated earlier from the others, dove into the river and swam toward the helicopter. When he finally grabbed onto the rope ladder held by a crew member, Fleming took off with him dangling in the air and managed to make it back to base.

Fleming was recommended for the Medal of Honor by his commanding officer, who was killed in action in April 1969, about the time that Fleming heard that the recommendation had been accepted. The medal was presented at a White House ceremony by President Richard Nixon on May 14, 1970.

After returning from combat, Fleming served four years at the Air Force Academy. Later, he was vice commander of the Air Force Officer Training School in Texas and the operations officer of the Squadron Officers School in Alabama. He retired as a colonel after more than thirty years of military service.