Home » About the Program » Walter Ehlers 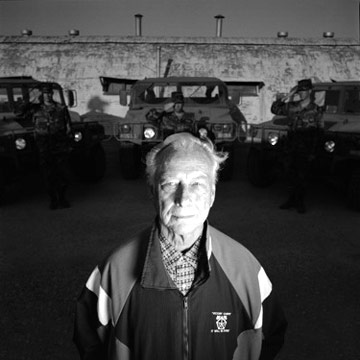 Walter Ehlers’s older brother, Roland, had bullied and protected him throughout their childhood in Kansas. By D-Day, the two had already fought their way through North Africa and Sicily in the same unit. While training for the Normandy landing, Walter was made a squad leader and transferred to a different company. The brothers wished each other luck and promised to “meet up on the beach.”

The first wave was pinned down on the beach. Ehlers’s squad, along with about two hundred other soldiers, were on an LCI (landing craft, infantry) scheduled to be in the second wave. Orders were quickly changed. Ehlers and his squad were transferred to a Higgins boat and sent to the beach three hours ahead of the second wave. They were not prepared for the chaos that they found on the beach.

By June 9, Ehlers’s unit had worked its way about eight miles inland, near the small town of Goville. The French countryside was checkerboarded with thick hedgerows several feet high, which provided cover for German units fighting desperate rearguard actions. As it moved ahead through the dense brush, Sergeant Ehlers’s platoon suddenly came under heavy fire from machine guns and mortars. Ehlers climbed up a hedgerow and called on his men to follow. He spotted a German patrol coming up from the other side and killed four of the enemy. Ordering his men to fix bayonets, and firing from the hip, he destroyed a machine-gun nest and scattered a mortar crew. Next he attacked a second machine-gun nest, killing three more soldiers.

The platoon moved out the next morning, but it came under intense fire from both sides. When the company commander ordered a withdrawal, Ehlers realized that if someone didn’t provide cover, the Americans would be picked off one by one. Motioning to his automatic rifleman to follow him, he scrambled to the top of a mound of earth that provided a vantage point on enemy positions. Then the two men began to shoot at German machine guns and mortars, drawing fire on themselves as the rest of the platoon headed for cover. Ehlers was hit in the back but managed to kill the sniper who shot him. When his automatic rifleman was badly wounded, Ehlers dragged him to safety despite his own injuries.

Ehlers was treated at a field station. The bullet that hit him had actually entered his side, ricocheted off a rib, and exited through his back into his pack—where it pierced a picture of his mother, a bar of soap, and his entrenching tool. He insisted on returning to action; unable to wear a backpack, he strapped on two bandoliers of ammunition, picked up a rifle, and went to find his men.

A month later, on July 14, Ehlers encountered his brother’s company commander, who told him that Roland had died at Omaha Beach when an enemy mortar round hit his landing craft. Ehlers saluted the officer who had brought the bad news, then found a private place where, for the only time during the war, he “went to pieces.”

In December 1944, on a train headed back to the front after recuperating from another wound, Ehlers read in Stars and Stripes that he had been awarded the Medal of Honor. Before he could react, the soldier sitting next to him saw the news, too. Knowing Ehlers only by his last name and knowing that he had a brother, he said, “Hey, I see that your brother just got the medal.” Without looking up, Ehlers replied, “Yes, I read that, too,” saying to himself that Roland certainly deserved it.