Home » About the Program » Roger Donlon 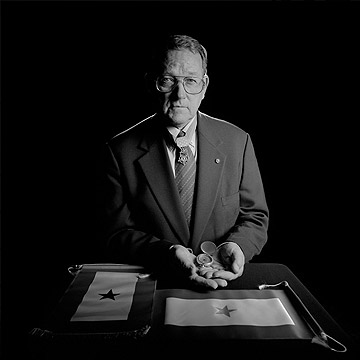 Roger Donlon always felt that the military was his destiny in life. His father had served in World War I; all four of his brothers served in the Army or Air Force. He had wanted to go to the newly established Air Force Academy and learn to fly, but an eye examination detected the beginning of a cataract. Instead, Donlon graduated from the U.S. Military Academy Preparatory School and qualified for West Point in 1955. After two years he resigned to join the Army. He graduated from Officer Candidate School and was eventually assigned to the 7th Special Forces Group in 1963.

In the spring of 1964, Donlon, now a captain, was sent to Vietnam as commander of the twelve-man Special Forces Team A-726. Their mission was to train, advise, and assist a civil defense force that provided physical security and improved the living conditions for approximately five thousand peasants in several villages in the Nam Dong Valley, a few miles from the Laotian border. Camp Nam Dong, as the Americans’ base was called, also included 311 South Vietnamese irregulars and 60 Nungs, ethnic Chinese fighters who fiercely opposed the Communists.

At around 2 a.m. on the morning of July 6, 1964, Captain Donlon, having just finished walking guard, entered the camp mess hall as a mortar round exploded on the roof, knocking him down. He got up and sprinted toward the camp’s main gate. He saw three Vietcong sappers, each with dynamite strapped to their backs, and killed them. Another mortar round hit, knocking him down again and tearing off one of his boots. Hearing one of his men yell that the enemy was near the ammunition bunker, he ran there. A third mortar round exploded, tearing off his other boot and all his equipment and wounding him badly in his arm and stomach. He tore off a piece of his shirt and stuffed it into his stomach wound to stop the bleeding. He later learned that approximately nine hundred Vietcong were threatening to overrun the camp.

Over the next several hours, Donlon scampered from one position to another, providing his men with encouragement and ammunition. As he moved the wounded team sergeant to safety, another mortar round hit, injuring him in the shoulder and killing the sergeant. Donlon then treated four wounded Nungs so they could stay in the fight. Withdrawing his force to the few remaining secure areas in the camp, he was hit repeatedly by shrapnel in his face and over the rest of his body.

Finally, a U.S. aircraft dropped flares. The sky was suddenly illuminated and Donlon saw how deeply into the camp the enemy had penetrated. Directing his force’s firepower, he and his men were able to keep the Vietcong at bay until daylight. The next day supplies were air-dropped to the camp, and Marine reinforcements arrived, allowing Donlon and his wounded team members to be evacuated by helicopter.

Roger Donlon left Vietnam on Nov. 20, 1964. On December 5, President Lyndon Johnson awarded Donlon the Medal of Honor, the first of the Vietnam War, as Secretary of Defense Robert McNamara read the citation. All nine survivors of Team A-726 were present. Introducing them to the President, Donlon said, “The medal belongs to them too.”

Donlon later asked to go back into combat in Vietnam, but the Pentagon had learned that the Vietcong had put a bounty on his head and refused until 1972, when Donlon returned for a second tour. He retired in 1988 as a colonel with thirty-two years’ service in the Army.