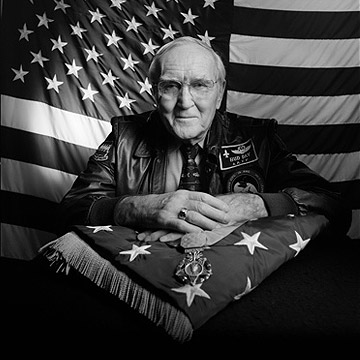 George “Bud” Day was seventeen in late 1942 when he badgered his parents into allowing him to volunteer for the Marine Corps. He spent nearly three years in the South Pacific during World War II, then returned home, went to college, and got a law degree.

In 1950, he joined the Air National Guard. When he was called up for active duty a year later, he applied for pilot training and flew fighter jets during the Korean War. After being promoted to captain in 1955, he decided to become a “lifer” in the Air Force.

In 1967, Day, now a major, was put in command of a squadron of F-100s in Vietnam involved in a top-secret program. Nicknamed the Misty Super Facs, their mission was to fly over North Vietnam and Laos as “forward air controllers,” selecting military targets and calling in air strikes on them. On Aug. 26, ground fire hit Day’s plane, destroying its hydraulic controls and forcing it into a steep dive. When he ejected, he smashed against the fuselage and broke his arm in three places. North Vietnamese militiamen below, seeing his parachute open, were waiting for him when he landed. They marched Day to a camouflaged underground shelter. When he refused to answer his captors’ questions, they staged a mock execution, then hung him from a rafter by his feet for several hours. Certain that he was so badly hurt that he wouldn’t try to get away, they tied him up with loosely knotted rope. On his fifth day in the camp, while a pair of distracted teenage soldiers stood guard, he untied himself and escaped.

On his second night on the run, Day was sleeping in thick undergrowth when either a bomb or a rocket landed nearby. The concussion left him bleeding from his ears and sinuses and sent shrapnel into his leg. Even so, he continued to hobble south for the next several days, eating berries and frogs and successfully evading enemy patrols.

Sometime between the twelfth and fifteenth day after his escape—he had lost track of time—Day heard helicopters and stumbled toward the sound. It was U.S. choppers evacuating a Marine unit, but they left just as he got to the landing zone. The next morning, still heading south, he ran into a North Vietnamese Army patrol. As he limped toward the jungle, he was shot in the leg and hand and captured soon afterward. He was taken back to the camp from which he had escaped and subjected to more torture.

A few days later he was moved to the “Hanoi Hilton.” His untreated wounds were infected, and he was suffering from malnutrition and unable to perform even the simplest task for himself. The fingers on both hands were curled into fists as a result of his torture; he regained some motion by peeling them back, flattening them against the wall of his cell, and leaning into them with his full weight. For more than five years, Day resisted the North Vietnamese guards who tortured him. On one occasion in 1971, when guards burst in with rifles as some of the American prisoners gathered for a forbidden religious service, Major Day stood up, looked down the muzzles of the guns, and began to sing “The Star-Spangled Banner.” The other men, including James Stockdale, the ranking U.S. officer in the prison, joined him.

George Day was released on March 14, 1973. Three years later, on March 6, 1976, both he and Admiral Stockdale were presented with the Medal of Honor by President Gerald Ford.