Home » About the Program » Sammy Davis 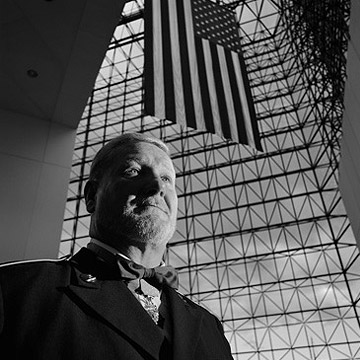 Sammy Davis took some ribbing in the Army because he shared a name with the famous entertainer. Much later, long after his military days were over, he would again gain some acclaim among his old comrades, this time as the “real” Forrest Gump.

Davis enlisted in the Army directly out of high school in 1966. Volunteering for the artillery because his father had been an artilleryman in World War II, he was assigned to the 4th Artillery. Soon after completing training, he asked to be sent to Vietnam.

Early on November 18, 1967, his unit of four guns and forty-two men was helicoptered into an area west of Cai Lay to set up a forward fire-support base—Firebase Cudgel—for the American 9th Infantry Division operating in the area. Shortly after midnight the next morning, Private First Class Davis’ Battery C came under heavy mortar attack. Simultaneously, an estimated fifteen hundred Vietcong soldiers launched an intense ground assault, failing to overrun the Americans only because a river separated the two forces.

Davis’ squad was operating a 105 mm howitzer that fired eighteen thousand beehive darts in each shell. When he saw how close the enemy had come, Davis took over a machine gun and provided covering fire for his gun crew. But an enemy recoilless rifle round scored a direct hit on the howitzer, knocking the crew from the weapon and blowing Davis sideways into a foxhole. Sometime before dawn, as he lay unconscious, he was seriously wounded in the back and buttocks by a beehive round fired from an American weapon. When Davis regained consciousness, he was convinced that the heavily outnumbered Americans couldn’t survive the attack, so he decided to fire off at least one round from the damaged artillery piece before being overrun. He struggled to his feet, rammed a shell into the gun, and fired point-blank at the Vietcong who were advancing five deep directly in front of the weapon; the beehive round cut them down. An enemy mortar round exploded nearby, knocking Davis to the ground, but he got up and kept firing the howitzer. When there were no more rounds left, he fired a white phosphorus shell, and then the last round he had—a “propaganda shell” filled with leaflets.

At this point, he heard yelling from the other side of the river and realized that GIs had been cut off there. Despite the fact that he could not swim due to his injuries, he got in the water and paddled across on an air mattress from the American camp. Scrambling up the bank, he found three wounded soldiers, one of them suffering from a head wound that looked fatal. He gave them all morphine and got the gravely wounded soldier back across the river where others pulled him to safety. Davis then went back for the other two wounded soldiers and pulled them onto the air mattress across the river to the firebase. He eventually made his way to an American howitzer crew and resumed the fight.

While he was recovering in the hospital, Davis learned that he was going home. He petitioned General William Westmoreland to be allowed to stay with his unit. Permission was granted, although Davis was so hobbled by his wounds that he was made a cook.

On Nov. 19, 1968, exactly one year and one day after the nightlong firefight at Cai Lay, Davis received the Medal of Honor from President Lyndon Johnson. Years later, footage of LBJ putting the medal around Davis’s neck appeared in the movie Forrest Gump (with Tom Hanks’ head substituted for Davis’), and Gump’s fictional Medal of Honor citation was loosely based on Davis’ real one.