Home » About the Program » Bruce Crandall 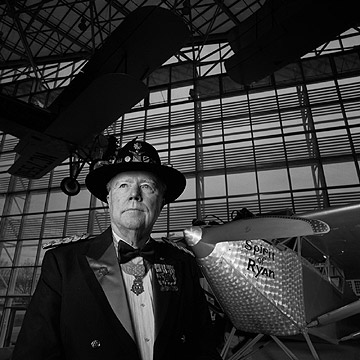 Growing up in Olympia, Washington, Bruce Crandall, a high school baseball All-American, hoped to become a professional baseball player. But he was drafted into the Army in 1953 before he could be signed to a contract. He went through Officers Candidate School and went into aviation after graduation, learning to fly fixed wing aircraft and helicopters. During much of the next decade he served in Combat Engineer units or flew topographic missions, mapping in the Artic, the deserts of Libya, and the jungles of Central and South America.

In 1964 Crandall was assigned to the 11th Air Assault Division and helped develop air assault tactics that would later be used in Vietnam. In 1965, Crandall, now a major, became commanding officer of Company A, 229th Assault Helicopter Battalion at An Khe, Vietnam.

On November 14, 1965, Major Crandall’s flight of 16 helicopters was lifting troops of the 1st Battalion, 7th Cavalry into an isolated area near the Cambodian border known as Landing Zone (LZ) X-Ray in the Ia Drang Valley. It was supposed to be a routine search and destroy mission but became the first major battle between a U.S. unit and a large North Vietnamese regular Army combat force. The battle was later dramatized in the film, We Were Soldiers.

After Crandall’s helicopters had made four lifts into the LZ, they came under intense enemy fire. The enemy, firing from within the landing zone, wounded or killed a number of those on the assaulting aircraft, some before they could exit. Crandall’s aircraft exited the battlefield with 3 dead and 3 wounded. Due to the intense fire, the infantry commander closed the LZ to further helicopter operations. Crandall, recognizing that the American force desperately needed ammunition and were taking heavy casualties, asked for another volunteer crew to fly with his to the aid of the besieged Battalion. Captain Ed “Too Tall” Freeman (himself a recipient of the Medal of Honor for this action) stepped forward and the two helicopters returned to the fray.

In the first 14 hours of the 3-day battle, Crandall made 22 flights into the LZ in his unarmed helicopter, most of them after the ground commander had closed the LZ and medical evacuation helicopters had refused to fly missions due to the intense ground fire. On some of his passes, Crandall could see North Vietnamese soldiers just beyond his rotor blades. He kept coming back into the heavy enemy fire because he knew there was only a “magic minute” to get badly wounded soldiers off the battlefield and into medical treatment. During the day and into the night Crandall and his wingman evacuated more than 70 wounded and delivered the ammunition and supplies that kept the Americans from being overrun.

In January of 1966, Major Crandall flew another two voluntary missions after others had refused, evacuating 12 badly wounded troopers at night under intense enemy fire. He received the 1966 Aviation and Space Writers Association Helicopter Heroism Award given for the outstanding act of heroism during that year involving a helicopter, civilian or military.

Major Crandall served two tours of duty in Vietnam. In January 1968, he was badly wounded during another rescue attempt. He returned home after more than 900 combat missions in Vietnam. Following his convalescence, he continued to serve in the Army until his retirement in 1977 as a lieutenant colonel.

On February 26, 2007, Crandall, who had earlier been to the White House to see Ed Freeman receive his Medal of Honor and a second time to see a showing of We Were Soldiers, returned for his own ceremony. Before placing the Medal around his neck, President George W. Bush said, “Welcome back to the White House again, Bruce” and, “It’s about time.”