Home » About the Program » Jon Cavaiani 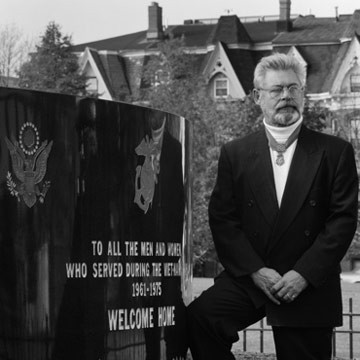 Born in England, Jon Cavaiani came to America with his parents in 1947 at the age of four. Although he was classified 4-F because of an allergy to bee stings, and although he was married with two children, Cavaiani enlisted in the Army shortly after being naturalized in 1968. He qualified for Special Forces and arrived in Vietnam in the summer of 1970; later he joined the Studies and Observation Group (SOG), an unconventional warfare task force, and was soon leading clandestine operations against the North Vietnamese.

In the spring of 1971, Staff Sgt. Cavaiani was in charge of the security platoon for an isolated radio relay site deep in the northwesternmost outpost of South Vietnam near Khe Sanh. The mission of his unit, which comprised 70 indigenous troops and 13 Americans, was to provide security for this intelligence-gathering operation.

On the morning of June 4, the camp came under attack by an overwhelming enemy force. Cavaiani moved through the exploding mortars, rocket-propelled grenades, and automatic weapons fire to organize a defensive perimeter and direct the U.S. force’s fight for survival. When a grenade knocked him down and wounded him as he was firing a .50-caliber machine gun, he picked himself up and continued to organize the fight.

By midday, it was clear that the small American contingent wouldn’t be able to fight off the North Vietnamese. Cavaiani called in help and directed the evacuation, but the helicopters broke off the mission before the last 17 of his men could be taken out. While they remained in the camp overnight trying to fend off enemy attacks, Cavaiani again established a defensive position and concentrated his efforts on strengthening the morale of his men.

The next morning, obscured by heavy ground fog, the North Vietnamese massed. Ordering his remaining men to try to escape, Cavaiani attempted to keep the enemy at bay with small arms and hand grenades. The survivors, who last saw him standing with a machine gun spraying the two columns of advancing soldiers, reported his heroic death when they got back to the American lines.

Although he had been shot in the back, Cavaiani was able to crawl into a bunker with another American, Sgt. James Jones. When two NVA soldiers entered, Cavaiani killed one with a dagger, and Jones shot the other. Then an enemy grenade exploded in the bunker. Badly wounded, Jones stepped out to surrender and was killed by rifle shots; Cavaiani played dead. When the North Vietnamese set the bunker on fire, he was severely burned but managed to escape into the jungle. He evaded capture for 11 days and had almost made it back to an American camp when he was caught by a 70-year-old peasant with an antique bolt-action rifle.

Cavaiani was taken to North Vietnam by his captors and spent time in “Plantation Gardens,” a prisoner-of-war camp, and in the interrogation center known as the Zoo before winding up in the “Hanoi Hilton.” When he was released in 1973, he heard that he had been recommended for the Medal of Honor. It was awarded to him on December 12, 1974, by President Gerald Ford, who spent an hour with the Cavaiani family after the ceremony.