Home » About the Program » Paul Bucha 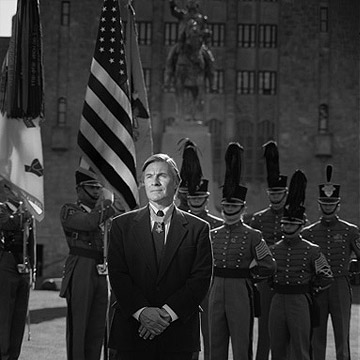 A high school all-American swimmer in the early 1960s, Paul Bucha was offered athletic scholarships from schools such as Yale and Indiana University, but he chose West Point instead. After graduation, he got an MBA from Stanford University, then reported to Fort Campbell. In 1967, he arrived in Vietnam with the 187th Infantry as a captain in charge of an infantry company.

On March 16, 1968, as part of the U.S. forces’ effort to push the enemy away from Saigon after the Tet Offensive, Bucha’s 89-man company was inserted by helicopter into a suspected North Vietnamese stronghold southwest of Phuoc Vinh. For the next two days, the unit destroyed enemy fortifications and base camps and eliminated scattered resistance. Late in the afternoon of March 18, the lead element of the company, about 12 men, exchanged fire with enemy soldiers. Then suddenly the entire area exploded with heavy machine guns, rocket-propelled grenades, and claymore mines, and the 12 men were immediately pinned down.

Realizing that his company had stumbled upon an entire North Vietnamese Army battalion bivouacked for the night, Bucha began to organize a defense to protect the men who were cut off. Crawling toward them through heavy fire, he spotted an enemy soldier whose machine gun was perched in the Y of a tree. He killed the soldier with his rifle and destroyed the bunker behind him with a grenade. As the North Vietnamese attacked repeatedly, he ordered a withdrawal and called for a platoon to evacuate the wounded. But the platoon was cut off as it was heading to a medevac landing zone.

As darkness fell, a grim thought passed through Bucha’s mind: I don’t even know the name of this place. What a godforsaken place to die. Just then one of his men ran by, calling out enthusiastically, “We’re really kicking some tail, aren’t we, captain?” The comment was so out of sync with what he had been thinking that Bucha laughed out loud and refocused on the struggle ahead.

Over the next few hours, everything unfolded in slow motion. Bucha was constantly on the move, encouraging his men, and shoring up the line of defense while directing artillery and helicopter gunship fire on the North Vietnamese. He did everything he could think of to make the enemy believe that his vastly outnumbered force was larger than it was — lobbing grenades at set times from different positions, spreading the firing patterns along the edges of his perimeter. At one point, with sniper fire whizzing around him and North Vietnamese soldiers so close that he could hear their conversation, he used flashlights to direct the evacuation of three air-ambulance loads of wounded, despite the fact that this illuminated him in the dark. At daybreak, he was able to lead a rescue party to the men who had been cut off from the company all night.

By then, the North Vietnamese had melted away. They took most of their dead with them, but more than 150 bodies remained behind on the battlefield. After Bucha’s dead and wounded had been medevaced out, he loaded the rest of his company, about 40 men, onto helicopters and returned to Phuoc Vinh.

In April 1970, at the end of his Vietnam tour, Bucha returned to West Point to teach an accounting course he had designed. After one of his classes, he found a telephone message from Washington. Returning the phone call, he was informed that he had been awarded the Medal of Honor. He received it on May 14 from President Richard Nixon.