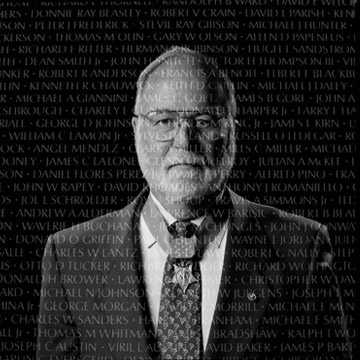 At the Cheshire, Conn., high school military assembly in 1958, representatives of all branches of the military made presentations to the student body. After the Navy, Army and Air Force speakers were all interrupted by hoots and catcalls, the Marine recruiter stood up and gave a tongue-lashing to the rude students, as well as to the faculty members who had made no effort to correct their behavior. As he began to stalk out of the auditorium, he was surrounded by students eager to sign up. Among them was senior class president Harvey C. "Barney" Barnum, Jr.

In late 1965, Barnum a first lieutenant, arrived in Vietnam with the Ninth Marines. On the morning of December 18, as the battalion was moving through the heavy overgrowth in Quang Tin Province south of Da Nang, the area suddenly exploded with the fire from enemy rockets, mortars, and machine guns. Barnum's company of about 110 men was cut off from the rest of the American force; the company commander was down, his radioman alongside him. Barnum ran to help them, but the radio operator was already dead, and the captain died in Barnum's arms. It was clear that the enemy had targeted the two men to destroy the company's command and control and overwhelm the survivors of the initial attack. Barnum took the radio off the dead operator, strapped it on his back, and assumed command.

Estimating that the marines were outnumbered about ten to one, Barnum quickly organized defenses, called in artillery fire, and led a counterattack on the enemy trench lines to destroy the machine guns that had his men pinned down. He saw that they weren't facing Vietcong but North Vietnamese regulars, troops disciplined enough to have let the bulk of the Marine battalion pass through before triggering the ambush.

At close to 6:00 p.m., after nearly eight hours of continuous fighting, the battalion commander radioed Barnum that it would be impossible to mount a rescue for his cut-off marines. Barnum knew that if he tried to hold out through the night, his dwindling force would be wiped out by morning, so he ordered the company engineers to blow a space in the heavy tree cover to allow two H-34 helicopters to land for the evacuation of the dead and the wounded. Then he ordered the rest of his men to move out in fire team rushes. Perhaps because the maneuver was so unexpected, they were able to break through North Vietnamese lines, crossing five hundred years of fire-swept ground to rejoin forward elements of his battalion before darkness.

Barnum was told two days later that the commanding general was recommending him for the Medal of Honor.

He was presented the medal on Feb. 27, 1967, by Secretary of the Navy Paul Nitze. But it would take months, even years, for the fragments of this day to come together in his memory. When they did, it was often only with the help of messages he occasionally received from the men he had commanded. "Somebody gave me your name," one Marine e-mailed him decades later. "I think you're a lieutenant who fought beside me with a .45 caliber pistol and a 3.5 rocket launcher for a while back '65. If so, thanks for saving my life." Until this communication, Barnum hadn't remembered the incident.

First Lieutenant Barnum left Vietnam in February 1966. He worked as a military aide in Washington on the condition that he be allowed to pick his next assignment. When it came time to make the move, he chose Vietnam. He was the first man who received the Medal of Honor in Vietnam to return to action there.